5 Newsletters For Staying Informed Without Visiting A News Site

Hey all, I know it’s a huge pain to stay informed and up to date with all the news running around. I mean these days, there are so many sites you could be going to, FAKE NEWS to read, and just information overload.

But there are some huge benefits to staying updated on the news. For me, one of the most important reasons is to have a “fail-safe” discussion topic to save myself from awkward conversations. Another one for me is being able to understand the world environment to make investments and all that.

But here are a few of the newsletters that I use to keep myself up to date. I’m sure that you’ll find them useful for keeping up to date and informed (for whatever reason you choose).

As fair warning, many of these newsletters have a business orientation to them, but I find that keeping informed about business is one of the best ways to stay informed about the world because business is always affected by significant world events.

Introduced to me by a friend, the Skimm is a hilarious, sassy newsletter. At the heart of the Skimm is the idea that they’ll read the news for you and summarize it in an easily digestible and hilarious manner.

Feeling a bit warm. So is planet Earth. Earlier this week, a draft climate change report by 13 federal agencies was leaked to the press. Thehighlights? US temps have been rising rapidly in recent decades. Thanks to human-produced greenhouse gas emissions that come from things like cars and factories. And extreme heat events (think: heat waves) are starting to happen more on the reg. Even if humans immediately cut all greenhouse gas emissions, global temps would still be on the highway to the danger zone. So there’s that. The feds are required to put together this sort of climate report every four years. And the Trump administration has to sign off on it before it’s published. But President Trump and EPA Chief Scott Pruitt have both said they’re not so sure humans are to blame for climate change. So some scientists are worried the report will get more than a few tweaks first. Hence, the leak.

In their own words the hustle is defined

“Your smart, good looking friend that sends you an email each morning with all the tech and business news you need to know for the day.”

They have a hilarious style of writing. Filled with pop culture references and words that just pop off the page.

The advocacy group, Campaign for Accountability, released a list of academics who they claimed had received funding from Google in recent years. And… everyone had a crap attack.

After the WSJ picked up the story, the internet was abuzz with outrage that a corporation might be influencing the outcome of supposedly “pure” academic research.

Google responded with their own strongly worded letter last week, calling the report “highly misleading” — and yesterday, they issued a follow-up burn GIF, in hopes of putting the rumors to bed once and for all.

This one isn’t quite as interesting or well written as the past two, but it’s by far my favourite way of keeping myself updated on all the major business events that are taking place around the world.

Every morningm they send you a newsletter involving the actions of stocks, their companies, and world economies. Too businessy? Maybe. But once again, the movements of companies and economies are often influenced by major news events.

So this newsletter is perfect if you’re interested in absorbing more about finance and economics while keeping yourself updated on the world economy.

New sanctions on Russia which President Trump signed into law are tantamount to a “full-scale trade war,” Russian Prime Minister Dmitry Medvedev wrote on Facebook. “The hope that our relations with the new American administration would improve is finished,” he added. The measure marks some of the strongest action Congress has taken against Russia since the Cold War.

This one is not about news.

Abnormal Returns is a newsletter that sends out a curated list of article links for you read every single day. These articles cover anything finance related from industry summaries for electric vehicles, to investment strategies, to personal finance, and economic outlooks.

It takes a lot of time to read through all of these articles, but the quality of the articles is always top notch, and I’ve learnt so much every time I sit down in the evening and start scrolling through.

So it’s perfect if you’re into learning more about investing, personal finance, and industry trends.

In their own words: “Backchannel is a digital magazine that delivers readers the most revealing technology stories in a single weekly dispatch: no fluff. Our readers are savvy people who care about the future, and want to help shape it.”

It’s a great way to keep up to date on technology trends and new happenings in the field. I’m no coder, but it’s pretty cool to read about some of the amazing innovation happening in the field and dreaming of what the future holds.

Susan Crawford is a columnist for Backchannel and a professor at Harvard Law School. She is also the author of The Responsive City and Captive Audience.

Imagine that you are Jeff Bezos. For four hours two weeks ago, you were the richest person in the world. And though Wall Street knocked you down a notch, pretty much everyone thinks it’s inevitable that you’re going to be number one again. You’re starting to be aware of the smell of the tar pits and you’re casting about for a way to put all that loot to some good. You’re eying the Gates-Buffet Giving Pledge and thinking that if you donate half your fortune it should make a difference. You’re comfortable with making older but meaningful institutions great again. 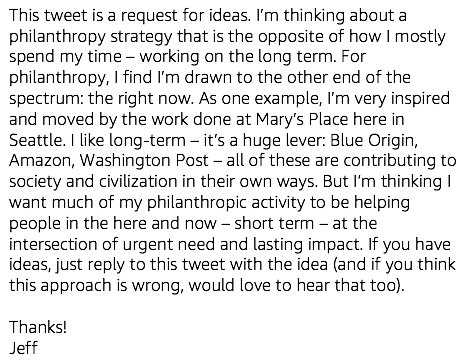 Though you don’t mention it, I suspect you’re thinking of stepping into an area that traditionally government might have addressed—but now, in an era in which the wealthy are doing better and better, benefits seem to go toward the top while the “urgent needs” of just plain people are left to the grace of a harsh marketplace. Like it or not, citizens are increasingly dependent on the kindness of strangers with billions of dollars,

I have a suggestion for you, Jeff Bezos. How would you like to become the Andrew Carnegie of our time?

Yes, I am talking about libraries. Those places where books sit on shelves, not delivered by FedEx. And so much more. Carnegie made them the center of his philanthropy, and almost became synonymous with them. More importantly, he changed countless lives with his investments in libraries. I have heard that you’re looking for big ideas, and this is one

That concludes this short list of newsletters for keeping yourself up to date and informed about the chaotic world. I hope you find it useful, and that it saves you the time and hassle of trawling through the many news sites hovering around in the Internet 🙂

The Mindset of Productive Procrastination